RESULTS ON INSECT FEED RESEARCH TO BE PRESENTED 27.4.16

-          PROteINSECT’s final conference ‘Insect Protein – Feed for the Future’ will share international knowledge, findings and results to demonstrate potential of insects as animal feed
-          On the agenda: regulation & legislation, quality & safety, commercial potential as part of a circular economy and consumer acceptance

The Global Food Security Programme has produced a report examining the potential of insects as animal feed following a workshop in August 2015.

The workshop aimed to identify knowledge gaps and scope the priorities for research around the use of insects as an alternative animal feed.

At the “Dennis Meadows Future Lectures” on "Sustainable Food" at the University of Applied Sciences JOANNEUM: he held a talk on "Entomophagy and Sustainability"

"I knew a lot about the ecological and nutritional benefits of insects, but during the research and the concept-design I found out that there is hardly any data about processing insects available. This is why I came up with an unconventional approach for the concept to dry insects with a drum-dryer. In the end I am very happy to be the winner of this competition!"

African partners in Mali and Ghana from the EC-funded PROteINSECT project have released a film demonstrating the potential of insect-based animal feed as a cost-effective, additional and novel protein source – and are keen to share their expertise with farmers across Africa as well as in Europe and worldwide.

Scalable methods for extraction of proteins from insect material sought

The PROteINSECT consortium focusses on house fly (M. domestica) and black soldier fly (H. illucens) for evaluation of their potential as protein source in animal nutrition. However, the incorporation of insect proteins for the production of animal feeds depends upon bringing proteinoceous material into solution.

On Monday 13 April the International Platform of Insects for Food and Feed (IPIFF) was officially launched. IPIFF draws together under a single voice insect-producing companies from the Netherlands, France, Germany and South Africa to support the development of the insect industry in Europe and worldwide.

Elaine Fitches Co-ordinator of PROteINSECT welcomes ‘the international collaborative industry platform approach being taken by IPIFF’s president Antoine Hubert to facilitate discussions on the use of insects as food and feed’.

Completing the survey should take you less than 10 minutes.

“Insects as a sustainable source of protein for animal feed and human nutrition”.

The use of the artificial rearing and the mass production of insect biomass for animal feed (aquaculture, livestock, pet food, etc.) and human nutrition.

PROteINSECT’s work in engaging with the public and tracking the impact of that work earned the EC funded project the runner-up spot in CommNet’s Impact Awards (www.commnet.eu). PROteINSECT’s entry covered the project’s consumer survey which demonstrated greater support for the use of insects in feed than was expected,  traditional media engagement via press releases, and the project’s active social media campaign particularly on Twitter.

Elaine Fitches, Co-ordinator, who presented PROteINSECT’s work at the recent Impact Awards ceremony, said: “Having seen the high standard of work and presentations by other projects at the ceremony, I am delighted that PROteINSECT was short-listed and awarded the runner-up slot in the Engaging Citizens category. This is an important area of work for our project as consumer acceptance of the use of insects for animal feed is vital to the emergence of this innovative source of animal nutrition.”

Professor Ronan Gormley of University College Dublin, who was one of the award judges and chaired the awards ceremony said: “It’s vital that researchers do more to communicate their work to a wider audience in order to really deliver on the public funding they have received. It’s great to be involved with these awards to recognise projects that are doing well and I hope this inspires others to reach out and communicate their research to a wider audience.” 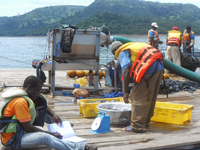 Nicole Pelusio reports on her activities.

Why are insects not allowed in animal feed?

This whitepaper contains valuable information on the advantages and disadvantages of insects in animal feed. It also gives you a clear view on the current legislations and the changes that need to be made. Why are insects not allowed in animal feed?

Protix has led the way in EU legislative efforts. In march 2013 Protix was ready to invest and construct a 10.000 ton+ facility in the Netherlands which would have converted supermarket and food production after-use-date. You can find more on IPIFF on www.ipiff.org. 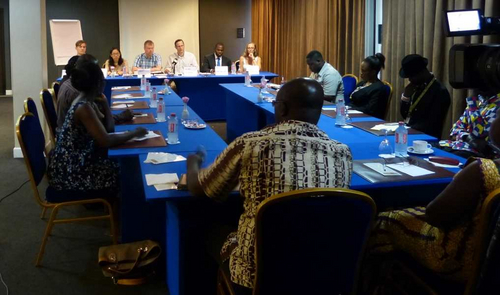 On the 16. June a Press Conference was held in Accra, Ghana. A room full of Journalists from TV, Radio and Print interviewed PROteINSECT Project Partners from Fish for Africa, eutema, Stirling U, NUScience, Wuhan U and KUL.

The Press Release can be Downloaded here...

Thousands of Flies, Millions of Maggots, and still a great place to visit! 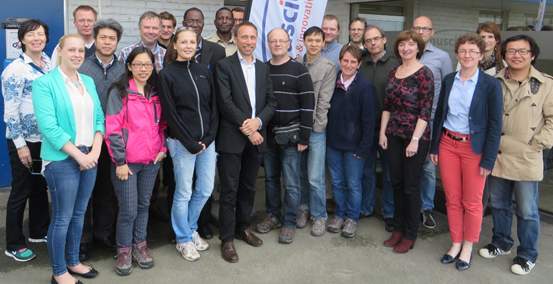 PROteINSECT participants from China, Africa, Belgium, Spain, England & Scotland met for a
two-day project meeting (12/13 May) hosted by project partner Nutrition Sciences. As well as providing a timely update on scientific progress on production & processing of fly larvae, partners discussed plans for the imminent safety & quality testing, the newly announced engineering competition and the forthcoming industry & consumer surveys. Also high on the agenda was final arrangements for PROteINSECT’s presentations and presence at the Insects to Feed the World Conference at Ede, The Netherlands (14-17 May). 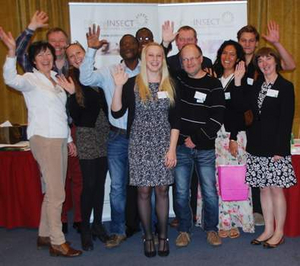 PROteINSECT participated in force at the recent Conference in Ede, The Netherlands, with presentations on media coverage, consumer surveys, current European legislation, safety & quality testing, life cycle analysis, and production systems in China and Africa. The project provided an information stand, presenting videos, stills photos and the opportunity for visitors from across the Insect food and feed sectors to speak with PROteINSECT experts. Over 100 delegates signed up to receive more project information, with some expressing particular interest in the soon to be announced Student Engineering Competition. Below are links to the slide sets of the presentations given on consumer acceptance by Rhonda Smith and current European legislation by Rosie Pryor. More slide sets will be made available in due course.

Presentation on production in Mali – Debates at the stand – Safety first, says PROteINSECT 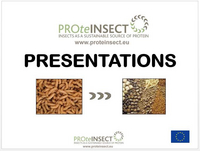